Mattew Stafford becomes headline maker in the NFL playing at the position of quarterback. In the NFL draft of 2009, Stafford selected by the (Detroit Lions). He recently inducted in the list if highest-paid quarterbacks in NFL and joins the richest athlete list of Forbes. 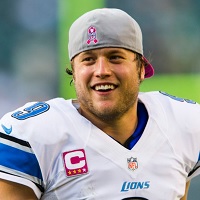 Matthew Stafford received the award of (Pro Bowl Offensive MVP) in 2014. In 2018, alongside Matt Ryan and Jimmy Garoppolo, he signed most expensive contract deal in NFL history. Stafford five year new deal is worth of $135 million ($60.5 million) is guaranteed. There is a $50 million bonus which includes $34 million in the 2017 signing bonus in August and $16 million paid in the start of 2018.

He is earning big money from the endorsement and listed among the most successful athletes under 30. His endorsement deals include (Nike, PepsiCo, Fanatics, Blue Cross/Blue Shield, Ford Motor, Panini and St. Joe’s Hospital) from where Stafford earn $2.5 million a year.