Khabib Nurmagomedov the most impressive Ultimate Fighting Championship fighter. He proved himself in the UFC ring. The Russia (light weight) currently undefeated in UFC after making professional debut in 2012 after winning fight from (Kamal Shalorus). Nurmagomedov is now making big money from the purse payouts of main events. 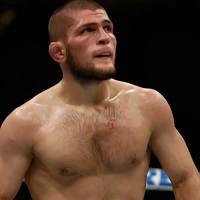 In 2008, he turned pro fighter and win his first in (CSFU: Champions League) against Vusal Bayramov. But rise to fame as mixed martial arts fighter after taking part in competitions M-1 Challenge and ProFC.  At UFC 148 event Nurmagomedov defeated (Gleison Tibau) introduce himself for the light weight title. He earned $30k from the fight which include 10k bonus.

After back to back wins in main UFC card fight events which include (148,160,165,205). His purse money increased upto from $30k to $300k per fight. Before Max Holloway name considered as opponent for Nurmagomedov fight its (Tony Ferguson) who is out from the card due to injury. The purse split is bigger (60/40) this time and Nurmagomedov leave arena with ($300k).