Alisson Becker the first choice goalkeeper in the team of Brazil. Currently part of the premier league team Liverpool and getting popular for his goalkeeping skills. His annual earnings increased after joining the new club on new contract terms. 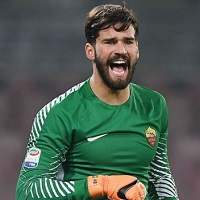 Becker turned professional football goalkeeper in year 2013. His career began from Brazilian football club (Internacional). Alisson played 44 matches for the club from 2013-2016. He signed one of the most expensive goalkeeper deal in Serie A almost €7.5 million fee and join Roma in 2016.

He played 2 season with the football club (Roma) and made his name among the UEFA Champions League Squad of the Season 2017–18. Becker finished as runner-up for Champions league goalkeeper of the year in 2017-18. Liverpool in 2018 signed Alisson for a fee of £66.8 million. The deal made him the most expensive goalkeeper transfer of all time.