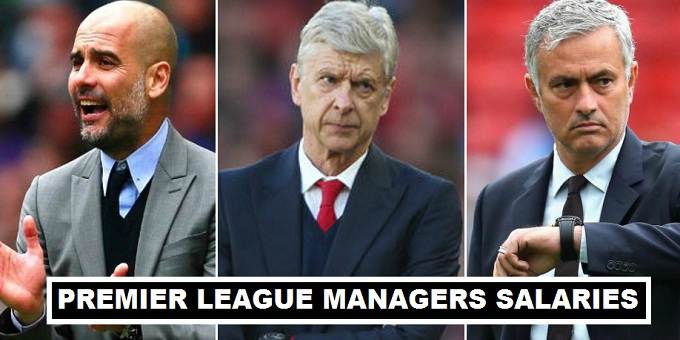 Managers plays the important role for any team, they are the one who had to answer the question if team is not giving results according to board and fans exceptions. Some clubs take actions so early once the team start losing matches with next few fixtures they sack the managers, so its pretty difficult to understand what pressure football managers went through.

Pep Guardiola: Contract Salary (£15 Million): Manchester City:
Pep Guardiola after leaving Bayern Munich, in 2016 joins Manchester City as their new manager. Under his management Manchester City finished on 3rd place in Premier league season (2016–17). There is no major title so far won by him as City manager. He is currently world highest paid football manager.

Arsene Wenger: Contract Salary (£8.5 Million): Arsenal:
Arsene Wenger is doing manager job for Arsenal since 1996, under his management club has won number of Premier League titles, FA Cup titles, League Cup titles. After 2004, Arsenal did not win a single premier league title under his management. The team reach the final of Champions League but suffer defeat. In 2017, Arsenal only wins (FA Cup title and FA Community shield) defeating Chelsea in both competition.

Jurgen Klopp: Contract Salary (£7 Million): Liverpool:
Jurgen Klopp brings a new hope to Liverpool management, Liverpool qualified for the champions league after finishing on 4th place in Premier league season 2016-17. He is hopeful to bring trophies to the club with a start of new season.

The 5 Most Earning Managers in Premier League 2018:

In Premier league, from last few years there are couple of big changes we have seen in the managers. Manchester United changed two managers (David Moyes and Louis Van Gaal) after Sir Alex Ferguson retired from football. Jose Mourinho is currently managing the team who is well aware of the fans exceptions. Manchester City signed most expensive manager deal with Pep Guardiola so they will get themselves on the top of Premier league table.