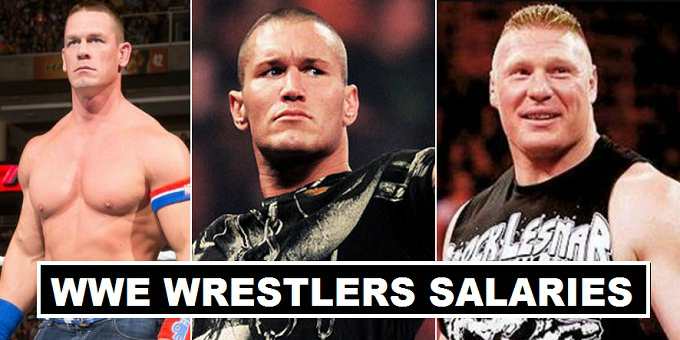 Wrestlers who gets fame get long term contract from WWE depending on their fitness and wrestling skill level. There are some wrestlers who are in contract with World Wrestling Entertainment for last 10 years they made big money each year with their appearances on the RAW and Smack Down franchises. According to some sources wrestlers professional level earn more then $5 million a year.

The above salaries taken from trusted sources. As you see in the above table how wrestlers in WWE get paid. The annual salaries adjusted after including the wrestlers weekly earnings and PPV earnings. A wrestler pad weekly salary only when he made appearance in match. Some wrestlers who earn extra money. When they made appearance in PPV’s fights such as Royal Rumble and Wrestle Mania. Mostly top super stars of wrestling who got big people support.

Note : The salaries above presented some true and some estimated. The newly joined wrestlers maximum earn $200,000 to $300,000 annually. PPV earnings details as you in the give table were estimated we are not sure how much accurate are they because WWE never public their wrestlers (Pay-per-view) earnings. According to sources top wrestlers earn $500,000 to $250,000 per (PPV appearance).

WWE spend big money on their top wrestlers for their accommodation and travelling expenses. John Cena, Randy Orton, Brock Lesnar, and Roman Reigns earn extra when merchandise related to them sold. John Cena gets the highest profit on his merchandise sale due to his popularity. Not every super star wrestlers gets the contract, only those who show good performance and fit for wrestling earn their contracts.

There is huge gap in the salaries of male wrestlers and female wrestlers. Nikki Bella and Natalya among the highest paid wwe divas. Natalya rise to fame after joining Smack Down. WWE divas also get ppv earnings, when they fight for the championship belt at main event. Brie Bella leave wwe after getting married to Daniel Bryan.

Mickie James recently made comeback to WWE and she gets a her contract. Divas earn weekly when they make appearance in the Monday Night Raw and Friday Night Smack Down. If Ronda Rousey joins WWE next year in 2018 she become the best paid WWE diva of all time after Lita and Trish.

Stephanie McMahon is currently the Cheif Brand Officer of WWE. Her salary upto ($1.2 million) her salary increased from ($770,000). Vince McMahon highest paid executive in WWE with annual base salary of ($3.2 million). A news source claimed this year in February in their article. Kurt Angle comes back to wrestling but this time he is not taking part as professional wrestler. But making matches as general manager of (WWE Raw). Kurt Angle salary said to be ($600,000) annually but its not confirmed yet its an estimated amount.

Daniyal Bryan who announced his retirement from wrestling, comeback to Friday night Smackdown and he is the general manager of Raw. His new position in WWE surprise allot of wrestlers including big names (Brock Lesnar, Roman Reigns and Seth Rollins). Triple H is making limited appearance according to the story line, he is currently working as (Executive Vice President) and Chief Operation Officer of storyline in (WWE). Shane McMahon last year announced that he will be coming back to the WWE. He is currently holding the positon of (commissioner minority owner).