Novak Djokovic the Serbian tennis star who recently become the second all time highest prize money winner in tennis history. After turning professional in 2003, the 30 year old tennis star win number of major grand-slam events. He is the only Serbian player who made to the Forbes richest athlete list in year 2017. 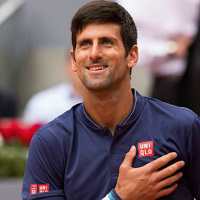 After Roger Federer, Rafael Nadal, its (Novak Djokovic) who becomes the most marketable athlete in the world. After winning major grand-slams such as (Wimbledon, US Open, Australian Open, and Roland Garros). Big endorsement brands approach him and signed deals with him. He becomes 17th richest athlete in the world according to Forbes list. In 2015, he sets a new record in tennis history after winning ($20 million) in one year from tennis tournaments & grand-slams.

In last few years his on-court earnings dropped from $12 million to $9 million. But the brands endorsement bring his name among the expensive tennis player. He won six grand-slams events out of (8 grand-slams) during the year 2014-16. Djokovic holds the record of (3 consecutive finals at each Grand Slam). The record that bring Djokovic name in spotlight during year 2015, when he reached (15 straight finals reached in a season).