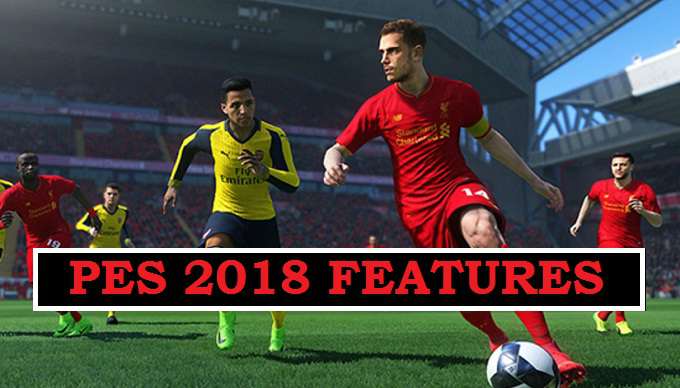 Pro Evolution Soccer 2018, making its way to the market in the month of September. The publishers (Konami) did great job with previous PES 2017, the game sets some selling records on XBox, PC, and PlayStation platform. Its the 17th installment of the game. Barcelona will be one of its special edition, that will also seen on the cover main cover of the game. There are many improvements made by the PES game makers to dominate the markets and outclass the Fifa 17.

Well PES 2018, will be in markets of United States on 12th September while UK and Asian fans can buy the game from market on 14th September 2017. How much worth is this version of PES, the demos were already hit the market in July.

Faster & Better Game-play :
The first thing we will discuss is gameplay, as previously Konami promise to its fans that they will make several changes to the game-play that make it more realistic and efficient. Further the developers announced a new “strategic dribbling” procedure that will allow the user to get more control in the possession. They are working on suitable movements in the game to make defenders wrong foot. One of the most important thing they said they will improve is set pieces. There will be new free kick styles and penalty styles introduced in the game.

Visual Reality :
The biggest change taking place in the new PES 2018, is Visual Reality which will bring a new shape to the (authenticity of football). Konami added that “the realism of turf, lighting during the day and night matches, and the entrance of players in the tunnel most of the genuine data that was collected at the Camp Nou and Signal Iduna Park.

New Online CO-OP :
The new PES comes with the dedicated 2v2 and 3v3 co-op play, with support from the local guest. You can enjoy matches while playing against your friends or you can play online competition with worldwide players.

Major PC Improvements
There are major changes take place in PC Steam version specially the graphics for the game is enhanced. Which means now the game will give you the same quality just like on the platforms you see like (XBOX and PlayStation).

There are many rumors on going that Usain Bolt is part of PES 2018, but not any more rumors, he included in the game. He expressed many times to pursue professional football career. You can play with him in PES 2018 in the myClub mode. He will be the fastest player in the game.

New Clubs & Leagues :
The one thing that every PES user got frustrated is that PES have very less team and league licenses. Such as Manchester United named in the game as of (MAN Reds). Yes there are football leagues but not all leagues teams got licenses so it will be a mixed experience for the PES fans. So far there is not much information available about the clubs that got licensed before the game announced. There are some modified teams which include (Barcelona, Liverpool, Atletico Madrid, Borussia Dortmund and FC Schalke).